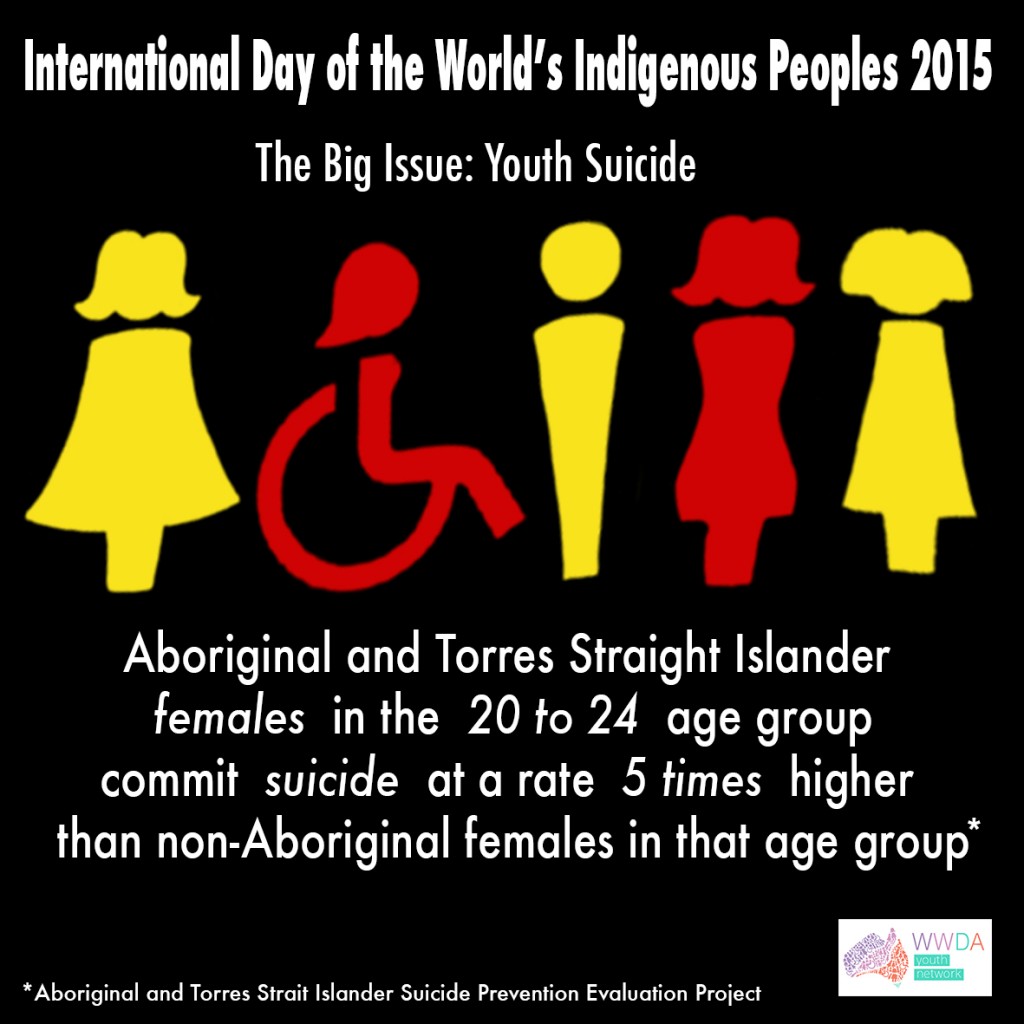 Today, 9th of August, is the International Day of World’s Indigenous Peoples 2015. The WWDA Youth Network would like to focus on the issue highlighted by young Indigenous peoples at the 2015 UN Permanent Forum on Indigenous Issues – Self-Harm and Suicide.“Across Australia, young Indigenous Australians up to 24 years old are 5.2 times more likely to die due to intentional self-harm than other young people in the same age range.” ¹

A wave of youth suicide and self-harm is ravaging indigenous communities in every region of the world, particularly in the Arctic, the Americas and the Pacific, the UN says. In May 2015, the 14th Session of the UN Permanent Forum on Indigenous Issues was held in New York, and took a look at this trend. The Forum recommended a range of actions to be undertaken by countries, and by the UN, to put a halt to the scourge. The UN News Centre spoke with some of the participants in the Permanent Forum who offered personal insights into the causes of indigenous youth suicide and self-harm, and steps that could be taken to end it. ²

The available data suggests that indigenous peoples experience disproportionately high rates of youth suicide. Although the reasons for youth suicide are complex and difficult to define, interference with, and destruction of, cultural structures has caused stress throughout subsequent generations and is a major contributor to suicidal behaviour. Indigenous youth today face the challenge of striking a balance between their place within their indigenous community, and within the mainstream society of the country in which they live. They may feel marginalized from both, resulting in a sense of socio-cultural isolation. This isolation, compounded by contemporary manifestations of discrimination, such as disproportionately high levels of poverty and unemployment, may contribute to the high rates of suicide experienced by certain indigenous peoples.

In addition, geographic and cultural isolation limit many indigenous youths’ access to services. Indigenous youth are less likely to receive adequate health care, including mental health care. Historical injustices, as a result of colonization and dispossession of their lands, territories and resources that many indigenous peoples have suffered and continue to suffer has to a major extent not been resolved. This has had an impact on indigenous peoples in many ways including on their physical and mental well-being, and on the indigenous youth who are often frustrated at the additional challenges they face due to their distinct identity and culture.

It should be noted that suicides are not only committed by youth and any measures to address youth self-harm and suicide must take into account that indigenous children can and sometimes do also take their lives.

Recommendations from the Permanent Forum on Indigenous Issues
The Permanent Forum has, since its establishment made youth a priority. At its first session the Forum stated that it “…intends to make indigenous children and youth a focal point of its work in the years to come”.

The Permanent Forum has also recommended that States take specific action with respect to this issue. Recommendations have called for incorporating indigenous youth perspectives into existing youth policies and plans with particular efforts to address suicide among indigenous youth. Additional recommendations have urged States to improve data collection; to allocate adequate resources for prevention; to develop programmes to revitalize languages, cultures and customs; and to develop training programmes on suicide prevention and mental health awareness.

Issues regarding indigenous self-harm and suicide were raised during the 2012 International Expert Group Meeting on Indigenous Youth. The meeting highlighted the need for States, the UN system and other actors to developed policies and programmes with an intercultural approach and to strengthen indigenous peoples’ control over the development of measures to address youth self-harm and suicide. The report from that meeting makes a series of recommendations regarding steps needed to tackle this complex issue (for details see E/C.19/2013), many of which were reiterated by the Permanent Forum in its 2013 annual report (See E/2013/43, paras. 8, 9 and 18). ³

For more information on self-harm, check out our article Overcoming Self-Harm