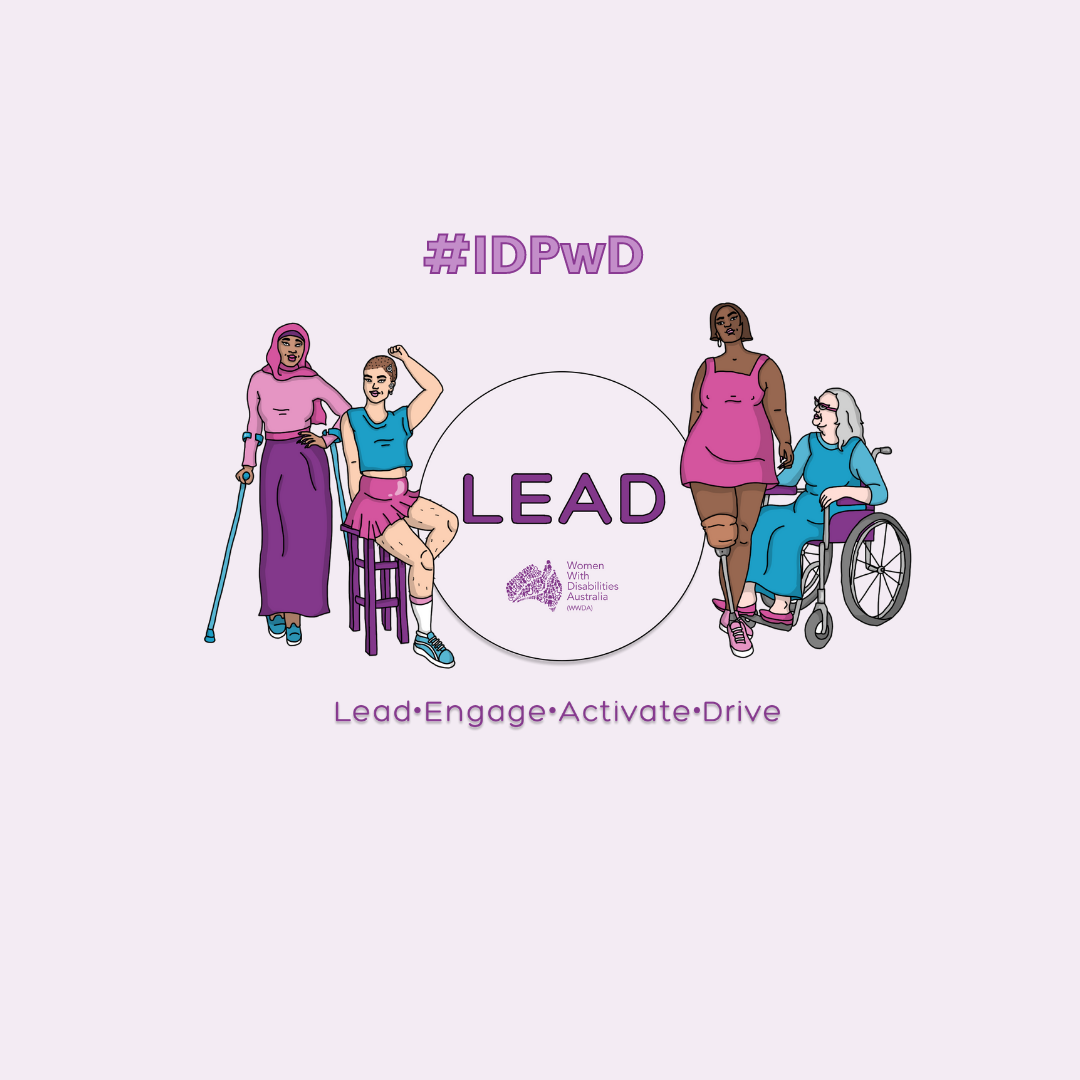 Over the next two years WWDA will deliver a range of leadership and peer networking opportunities including scholarships, programs and activities to ensure that women and girls with disability have their voices heard and respected.

We have called this project LEAD | Lead, Engage, Activate, Drive.

Our first step was to engage a Project Steering Committee, and we were fortunate to re-engage women who had worked on successful codesign projects that WWDA delivered (Our Site/Sunny). This committee is a group of women with disability, experienced and strong leaders in their own right, who will help steer and contribute to the project over the next few years. The committee will ensure that our project activities are accessible, inclusive, relevant, and most importantly, guarantee that WWDA LEAD is developed by women and girls with disability for women and girls with disability.

The second step was to ensure that the WWDA LEAD team developed an approach to meaningful codesign, that will underpin the way we deliver the WWDA LEAD project.

We are very excited to announce the new members of the WWDA LEAD Project Steering Committee. These are:

Akii Ngo (VIC): Akii (they/them) is the Executive Director of Chronic Pain Australia and a proud young disabled person with multiple chronic illnesses and disabilities, including complex chronic pain issues. Akii also serves on the Board of Disability Justice Australia as a Board Member, past Treasurer, and now Secretary.

Akii has been unwell from birth and has dealt with a lifetime of challenges relating to their chronic illnesses and disabilities. Akii is deeply passionate about the rights of people with disabilities and chronic illness, particularly for young people, womxn and children, especially relating to family and intimate partner violence as many of Akii’s disabilities are a direct result of violence.

Representation of many intersectionalities such as People of Colour, Migrant/Refugee peoples, LGBTIQ+, and appearance diversity are Akii’s big passions and what Akii aims to achieve. Akii is an internationally published model and believes in creating change within the beauty and fashion industry for disabled individuals, and is open to all opportunities to work with brands throughout Australia and overseas to achieve this. Akii also works as an expert disability, inclusion, prevention of violence against women (PVAW) and accessibility consultant for various disability organisations and proudly speaks on all topics using both professional expertise and lived experience.

Jane Britt (QLD): Jane Britt is the National Policy Officer at Blind Citizens Australia, a national representative organisation of people who are blind or vision impaired. Jane is a graduate of Vision Australia’s Graduate Start program in Service Innovation and Design.

She is a current Non-Executive Director of Queenslanders with Disability Network (QDN). Jane has worked with the Disability Leadership Institute as an Engagement Guru and as a freelance writer for the Australian Disability Clearinghouse on Education and Training (ADCET) and Eureka Street. As an integral member of QDeNgage for QDN, Jane has provided consultancy advice and feedback on disability for government consultations. Jane has recently been awarded a 2020 Vision Australia Award for her commitment to advocacy

Karen Fankhauser (VIC): Karen was a member of the expert advisory group for Sunny and currently holds a position on the Victorian Advisory Disability Council. Karen is also a member of the Disability Advisory Committee for the Mornington Peninsula Shire in Victoria. She was awarded Mornington Peninsula Shire’s Citizen of the Year in 2018 for her work in human rights advocacy and inclusion. Karen is passionate about leadership opportunities for women and girls with disabilities and accessible tourism and housing.

Kerrie Duff (WA): Kerrie is passionate about social justice and has worked/volunteered in human rights-based organisations for most of her life.  She holds a Bachelor of Arts, a Master of Human Rights and Certificate IV in Training and Employment. She is also a Leaders for Tomorrow graduate.

Kerrie worked with World Vision Australia for 12 years before moving to Perth in 2003. She has held a range of positions in the disability sector. Upon completing Small Business development training Kerrie undertook Australian Institute of Company Director training and Citizen-centred Leadership Community of Practice training prior to establishing her own business. Kerrie Duff Consulting was put on hold when Kerrie became a Planning and Support Coordinator with the NDIA. In September 2020 Kerrie joined the Integrated Support Solutions team as a p/t Support Coordinator.

Raelene Bock (NSW): Raelene Brock has a lived experience of disability, both visible and invisible. Raelene lives with her husband who also has a disability and is mum to 4 amazing teen/tweens and live in the Hunter Valley, NSW. I am currently the Peer Mentor Coordinator with Community Disability Alliance Hunter and studying to be a transformational life coach.

I love connecting people with the resources they need to live their best life, regardless of who they are and where they live, I’m excited to again be working with Women with Disability Australia (WWDA) to grow the potential and opportunities for all Australian women living with disability to develop and expand their leadership skills and influence.

Monique Crowden (TAS): Monique is a passionate self-advocate and leader for people with intellectual disability in Tasmania. Along with her other commitments, Monique has been involved with the Speak Out Association of Tasmania and Women with Disabilities Australia for several years.

In recent years, Monique has sat on advisory groups for a number of WWDA projects, including those which lead to the development of the Our Site website and the Sunny app; and is now representing her community on the WWDA LEAD Project Steering Committee.

Monique also volunteers with her the local girl guides group, is a mentor for young girls with a disability and is passionate about inclusion and a truly inclusive society.

Karin Swift (QLD): Karin has had an extensive career in the disability, advocacy and social policy space where she is committed to people with disability living valued lives in the community. Karin is a past President of Women With Disabilities Australia (WWDA) and has an extensive background in governance roles for other non-government organisations (NGOs). Karin has represented the Australian Government and WWDA at the Commission on the Status of Women 57 (CSW 57) held at the United Nations, New York, providing high level, strategic advice to on women with disability and violence and presenting at various side events. Karin has also led training alongside the Australian Human Rights Commission (AHRC) and been a keynote speaker for WWDA in Indonesia and South Korea on gender and disability and the elimination of violence.

We would like to thank all of these people above for committing to the WWDA LEAD Project Steering Committee for the duration of the project.