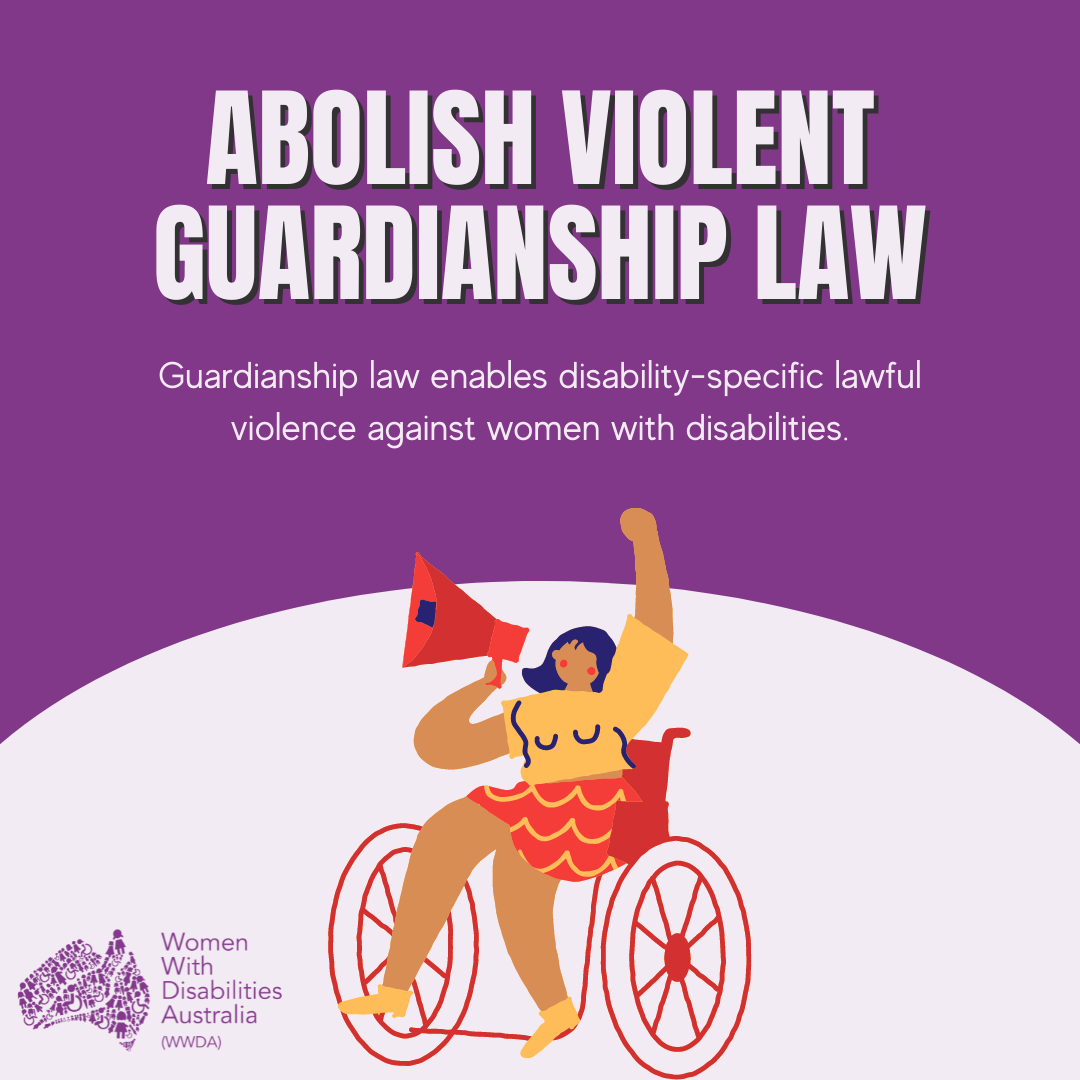 Women With Disabilities Australia (WWDA) is saddened and outraged at the events that were portrayed in last night’s ABC Four Corners Program, State Control. This program reveals the reality of the lives of many Australians with disabilities, who say they’ve been virtually abducted by the state, stripped of their assets, and stopped from speaking out – until now.

WWDA stands with all survivors of guardianship abuse, and with the survivors, families, advocates, and community members who have spoken out about exploitation and violence perpetrated by the Public Trustee in this program. For decades, WWDA has advocated for an end to violent guardianship laws and substitute decision-making regimes, highlighting the way in which guardianship law enables lawful violence against women with disabilities, including by allowing third parties to make decisions about a woman’s sexual and reproductive health.

“The events exposed in the Four Corners program last night, whilst shocking, have been happening to women and girls with disabilities for decades,” said Ms Carolyn Frohmader, WWDA Executive Director.

“In too many cases, the appointment of a guardian, including under the Public Trustee, can have a severe negative impact on people’s lives. The guardianship process should be considered a form of gender-based violence itself, particularly because of the loss of rights it entails,” said Ms Frohmader.

Heidi La Paglia Reid, WWDA’s Director of Policy and Programs emphasised, “Despite UN human rights treaty bodies calling on Australia to enact national legislation to prohibit forced sterilisation, this practice is still often forced on women with disabilities by legal guardians, based on ableist attitudes that these procedures are within their ‘best interests.’”

Tess Moodie, WWDA’s Senior Policy and Project Officer noted, “The Four Corners program has highlighted how vital it is that the current Royal Commission into Violence, Abuse, Neglect and Exploitation of People with Disability prioritises and schedules a specific hearing to investigate current guardianship laws and processes.”

Mali Hermans, WWDA Policy and Project Officer stated, “Guardianship laws in Australia pose some of the most serious human rights breaches in this country, with substitute decision-making regimes posing fundamental contraventions of the Convention on the Rights of Persons with Disabilities (CRPD). Women with disabilities have a right to autonomy and choice over their lives and bodies, that can only be achieved through the implementation and use of supported decision-making processes, where people with disability are given the support, information and resources they require to make decisions that are informed and autonomous.”

WWDA calls on the Australian government to prohibit the use of substitute decision-making regimes and urges the Royal Commission into Violence, Abuse, Neglect and Exploitation of People with Disability to immediately reschedule and prioritise new dates for a specific hearing examining guardianship and decision-making frameworks for people with disabilities.

If you have experience of guardianship abuse, you can tell the Royal Commission your story by arranging to speak with them in a private session or by making a submission. More information can be found on our website www.wwda.org.au.

Spokespeople may be available for interviews on request.