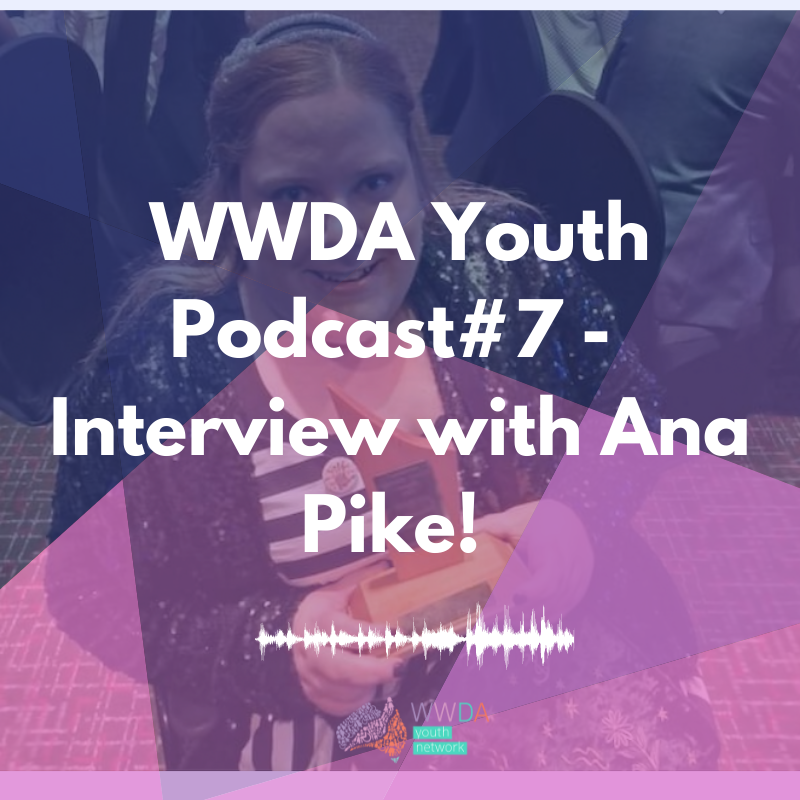 For our seventh episode and first episode of the year, WWDA Youth Advisory Group member Jade Taylor interviews Ana Pike! Ana and Jade talk about her advocacy in the disability community, specifically in Tasmania and, for movements including the Religious Discrimination Bill and the NDIS. In 2021, Ana was the recipient of the award for Outstanding Contribution by a Young Person at the Tasmanian Disability Festival Awards for her work in this space.

Download a copy of the transcript here or read below:

Jade:                Hi, everyone. Welcome back to episode six of the Women with Disabilities Australia, WWDA Youth Network podcast. Today, we’re interviewing Ana Pike. Ana is one of the members of the Youth Adversary Committee and has been a significant advocate in disability rights, specifically in Tasmania. I will start by acknowledg- acknowledgement of country, acknowledging that I am calling in from the [Gubbi Gubbi 00:00:47] and this land was stolen and never ceded. I would also like to acknowledge our elders past and present and extend that to any indigenous, any indigenous listeners.

Ana Pike:          I was born with a disability myself. I was born with spina bifida. Um, I also have a couple of chronic illnesses. Um, and it initially started with advocating for myself and it expanded on- on t- from that.

Ana Pike:          Can be, but, uh, I personally find my chronic illnesses a little bit more disabling. (laughs)

Jade:                Yeah? I- I- I love how you and I both have spina bifida but we both are on two different ends. Like, it just goes to show that you can live with the same disability and be two different people.

Jade:                (laughs) What Tas-, what Tasmanian specific activism around disability rights have you been involved with?

Ana Pike:          Um, I last year was involved with some local activists including some people from Witta. Um, with the NDIS we did a panel and that was in regards to the proposed independent assessments. That was my first big campaign. Um, I also, um, w- worked with the Greens on- on their campaign to try and get, um, financial support during the COVID support, um, campaign. They’re probably my two biggest ones.

Ana Pike:          Absolutely. I agree. Um, there are quite a lot of slashes going on with people whose, um, payments, um … people with payments at the moment, rather. So, I think that they’re still trying to get sneaky cuts through.

Jade:                (laughs) Um, what particular difficulties do you face being in Tasmania as opposed to the so-called quote unquote mainland?

Ana Pike:          Um, well, I couldn’t compare the two too much, ’cause I have been living here pretty much my entire life in Tasmania. However, specifically this year, being so small, we don’t have a lot of services. Um, and also, um, the infrastructure is very inaccessible, I find, as a wheelchair user.

Ana Pike:          Absolutely. And, um, for instance, um, e-scooters th- that’s going around at the moment in, um, Hobart when I live in Tassie, um, and because we don’t have the infrastructure to support that, that’s really becoming an issue for people like myself in wheelchairs.

Jade:                Yeah. I can imagine. Uh, I really think that … I don’t know. It’s something that’s so hard to change, because you’re not just changing a few people’s views. You know what I mean? Like, you’re ch-, you’re changing buildings and things. And I get that it’s really hard, but also it takes time. But it’s now getting to a point where it’s like, okay, well, we have the NDAS and the NDAS’s point is to bring us out in the community and to do thing and to go places so we can live a life like everyone else. But you can’t do that if you can’t go places because it’s not accessible. You know what I mean?

Ana Pike:          Absolutely. I think first and foremost it’s changing people’s minds, because it doesn’t matter if the funding’s there. If the people don’t want to do it, then- then th- there’s no point.

Jade:                Well, it’s like I was … When I was in Bundy, I wanted to do a lot of things, and people would just look at me because I was disabled and go, “No, no, you can’t do it. You’re too much of an insurance risk. You might hurt yourself. You might do this. You might do that.” And I come down here and it’s … I’ve, I’ve genuinely noticed a very big difference between Bundaberg and Brisbane, because I come down here and they at least go to me, “Oh, okay. Well, we can let you have a go.” You know what I mean?

Ana Pike:          Well, that’s, um … A- acceptance of risk or whatever it’s called is a really big thing in disability at the moment. Like, you can’t just look at a person and say, “No, you can’t do it,” without trying. Let people try.

Ana Pike:          Uh, well, I initially started that about three years ago when it first was being talked about. It started off with, um, being in community services circles, ’cause that’s what I was studying at the time. Um, and I went to, um, events around that. Um, like, um, Q and As and rallies, and then initially picked my interest. Um, and then recently, I’ve been working with, um, Bundy [inaudible 00:08:38] and few other local advocates with a petition to try and get that stopped.

Ana Pike:          Um, and just educating yourself with something, which would be great. And, um, bring it out to the public as much as possible.

Ana Pike:          Um, probably just people’s perceptions, and that goes through lots of issues that I’ve followed. Um, and, you know, people getting their backs up not wanting to change, I guess.

Jade:                Yeah. Yeah. I wholeheartedly agree. You can’t … Y- … It doesn’t … Change doesn’t happen overnight. And it takes a lot of people. And I guess for me, going back to something we were talking about before, it really goes to show when … with something like the independent assessments. Like, all of, all of us banded together and said, “No, we don’t want this. Like, we don’t want this.” And, you know, in my opinion, it was inhumane, but …

Ana Pike:          Oh, absolutely. I agree. And it’s just wonderful that we’ve got senators like Jo- Jordon Steele-John who- who- who have, you know, had our backs throughout all that whole period and as well as other- other disability-related issues. And [inaudible 00:11:33] us on and gave that platform.

Jade:                Yeah, exactly. And shout out to Jordon, because, I mean, he is just doing great things in the community and I honestly cannot thank that man enough. Like, I love watching him in parliament.

Jade:                Me and, um, Ashley actually, who I interview, um, she also likes him. And it’s like one of those things where, if you just be a bit human, people are going to like you. And that’s what he’s got. He’s got this human touch about him, like where you can relate to him. Even though I don’t have the same disability as him, but I can relate to him.

Ana Pike:          Yeah. Absolutely. Like, you don’t have to be going through the exact same path as somebody else to be relatable. You know? It’s just about having empathy and understanding. And, you know, that- that- that brings out that relatability.

Jade:                Yeah. And take- take five minutes to talk to someone. Like, really. I- I … The reason why I started doing all these podcasts was, yes, because, you know, history has to be told and there are very much so people out there who, like you, Ana, who are doing great things in the world, but some people wouldn’t even know what’s going on and what you’re doing. Um, but at the same time, like, it just gives a platform for someone to talk about what they’re doing.

Ana Pike:          Um, who opened the door before us and, you know, there’ll be plenty of people afterwards. And, um, I haven’t always been that spoken up about things. Uh, I had to get myself educated first. So …

Ana Pike:          Um, probably be a toss-up between the NDIS panel, just because that was my first big one, although I did have a lot of help on that, um, and also the work that I’m currently doing with the religious discrimination bill [inaudible 00:13:48].

Ana Pike:          But, um, wonderful at the same time. I had a great, great group of people that stuck by me for months. Um, and we’ve watched different changes that happened, um, which I really appreciate them. So, it was great.

Ana Pike:          Well, I’ve recently just gone back to school for first time in a couple of years, so this year, my big goal is to finish my schooling, which is a certificate for community services.

Ana Pike:          And just to keep on with working campaigns and keep fighting for equality for all.

Jade:                Yeah. That’s the biggest … Like, for me, I really … Like, after I get my … I’ve got one more medical thing to do and then after that I think I’m gonna go back to school for a bit. And, um, I really wAna become a peer mentor in mental health and things like that, but for, like, teens, because I guess I can-, I can really relate to them in some sort of way ’cause certain things. But, like, I really, really wAna do it this year. It’s just something my body, I’m like, “Yeah, school sounds good.” (laughs)

Jade:                That’s a big thing. Your support group is so important. Like, I … So, I, in the past couple of years, have really found what I’m going to refer to as my humans. Um, so, I have … (laughs) We- we don’t live in the same town, which is really frustrating sometimes, but I have … One of my best friends in the world is … lives in Canada. She also has spina bifida. Um, I call her my spina bifida sister because she’s the closest person to me that I’ve ever found symptoms-wise and, like, we can relate on a different level. Um, but then I also have (laughs) a group of friends that I know that I can jump on … So we- we spend all our time on Discord, because that’s what we do. Um, and I know I can jump on Discord and I can be having a really awful day. Even mentally or with my disability and pain, and I- I know that I can say, “I don’t wAna talk about it,” and that’s it. Like, they don’t push me to respond.

Ana Pike:          Absolutely. I- I totally get what you mean. Um, I have become a lot more comfortable with s- being someone who’s disabled and chronically ill the last couple of years, because I too have found that community and, um, that really helps a lot.

Ana Pike:          Uh, being a wheelchair user, I have a grabber at home, so I often have to use that to pick up things on the ground. I don’t know if that’s (laughs) a hack. But, um, just little things like that.

Jade:                Thank you so much, Ana, for talking to me today. I appreciate it. And good luck on all your bill and keep doing what you’re doing, ’cause you’re making great things happen.