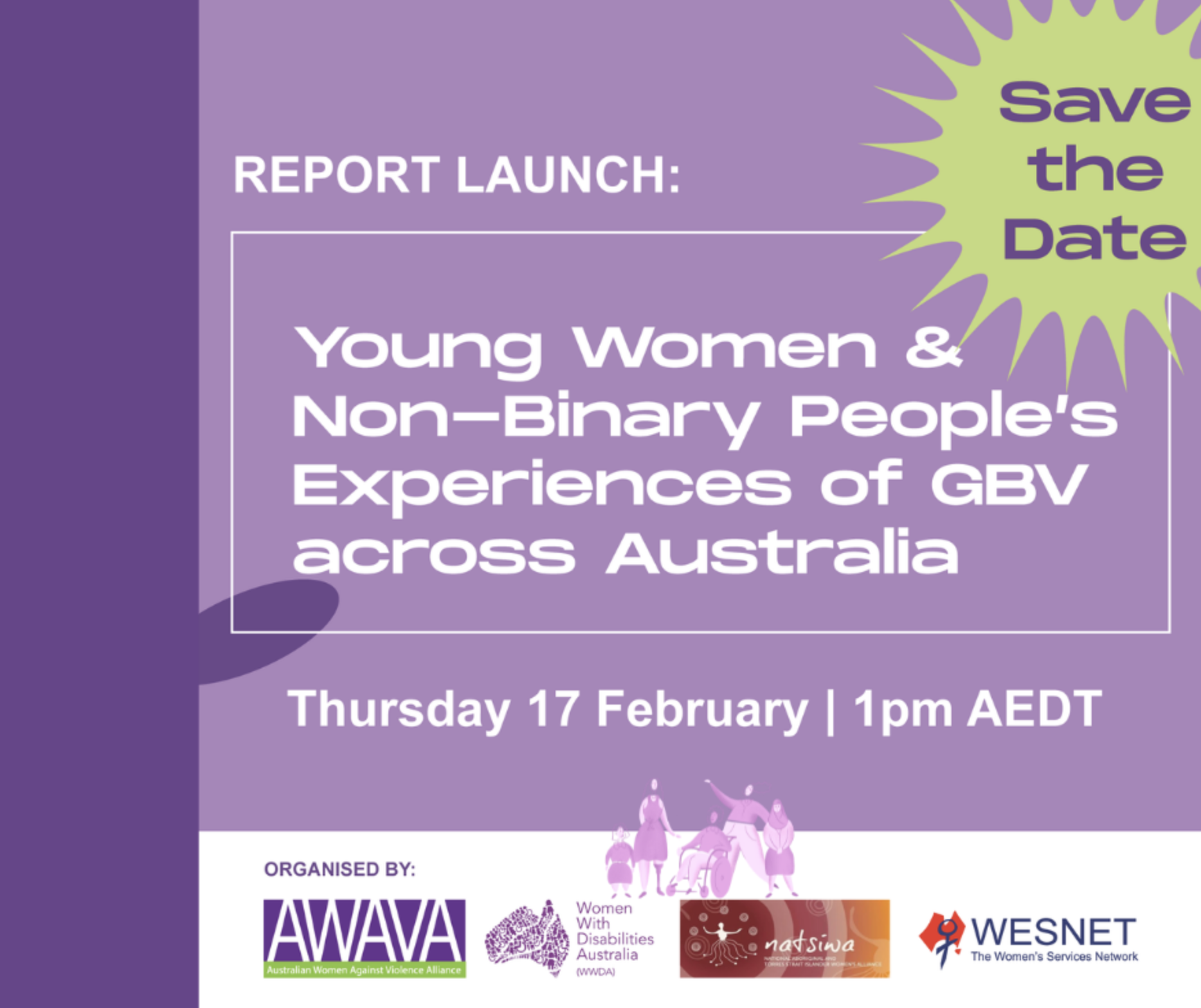 The Australian Women Against Violence Alliance’s much-awaited Report on Young Women and Non-Binary People’s Experiences of Gender-Based Violence across Australia is being launched at 1pm today at an online event run in collaboration with Women With Disabilities Australia (WWDA) and the National Aboriginal and Torres Strait Islander Women’s Alliance (NATSIWA).

The report findings emphasise the prevalence of violence and abuse in young people’s lives, along with the inadequacy of institutional responses to violence against young women and non-binary people.

The report makes clear that much more needs to be done to help young people. While an ultimate policy objective is to stop violence before it happens, there are pressing and significant barriers to healing and to justice that must be addressed. The report examines ways to improve reporting and support mechanisms, embed primary prevention, and secure justice for young victim-survivors.

WESNET CEO and former contract Manager for AWAVA said: “This report is heartbreaking but essential reading.  If we were hoping that life would be better for our daughters and young people, this is a brutal glimpse that nothing much is changing. In fact, it appears, that yet another generation of women and non-binary young people are experiencing violence and abuse at unacceptably high levels, from abusers who are seldom held to account. The systems and services that are designed to prevent violence before it starts and help after it are failing many of them. We desperately need to do better.”

WWDA’s Director of Policy and Programs, Heidi La Paglia Reid said, “This report provides much needed insight into the experiences of young people who are often invisible in standardised statistics. It is particularly good to see that a diverse range of young people participated in the survey, including those who identified as Aboriginal and Torres Strait Islander, lesbian, gay, transgender, intersex, or queer/questioning (LGBTQI+), from a refugee or migrant background and / or disabled”.

WWDA’s Policy and Project Officer, former AWAVA staff member and young advocate Mali Hermans said the report was a starting point for important conversations around justice for young people in the gender-based violence prevention sector. “Overwhelmingly, the data from this project demonstrated that young women and gender diverse people are being let down by institutions and programs that are supposed to be protecting us. Many respondents spoke to their lack of faith in mainstream services and systems like the police and courts, instead expressing their desire for transformative justice approaches and primary prevention initiatives that exist outside of current power structures.”

“Too many young victim-survivors are being retraumatised when reporting violence or seeking support. Racism, ableism, queerphobia, transphobia, classism and other harmful structures still exist within services, and mean that getting help is not safe or accessible. Young people’s yearning for different ways of responding to and healing from gender-based violence should encourage us all to be broadening our imaginations and listening to marginalised voices.”

The launch today includes speakers from AWAVA, WWDA and NATSIWA as well as a panel of young women and non-binary people, who will discuss what meaningful change to end gender-based violence looks like for a new generation of advocates.

Drawing on a 2021 survey and a subsequent community forum, the report was jointly produced by the Australian Women Against Violence Alliance (AWAVA), Women With Disabilities Australia (WWDA), the National Aboriginal Torres Strait Islander Women’s Alliance (NATSIWA), and the Women’s Services Network (WESNET).

The report and survey are notable for their diverse representation of young women and non-binary people.  Of over 300 survey respondents, 62% were LGBTIQA*, 26.4% were living with a disability, 7.2% were Aboriginal and/or Torres Strait Islander, 18% were migrants or refugees, and one in five lived rurally, remotely or regionally.