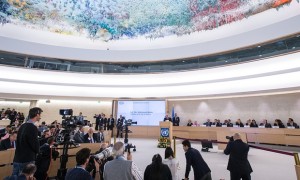 WWDA Executive Director, Carolyn Frohmader was recently interviewed by Bridie Jabour from the Guardian Australia during the Untied Nations Australia Universal Periodic Review. An excerpt of the article is provided below.

The United Nations has raised concerns Australia is breaching the human rights of women with disabilities by allowing their forced sterilisation.

Australia’s human rights record is being assessed by the UN human rights council before the universal periodic review and the sterilisation of women with disabilities was raised in its session in Geneva.

The treatment of asylum seekers and Indigenous people was also raised as well as discrimination in Australia of people with disabilities.

Carolyn Frohmader, CEO of Women with Disabilities Australia, said Australia does not have any laws in place to prohibit the forced sterilisation of women with disabilities, or children, and it falls under the UN definition of torture.

WWDA believes no child should be sterilised at all as they cannot give proper consent because of their status as minors.